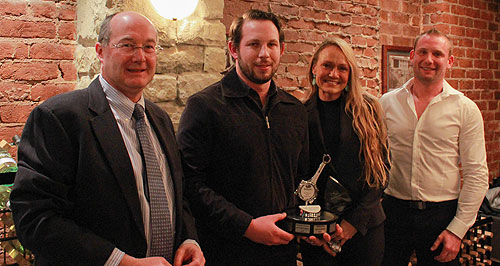 EBLEN Subaru foreman Tim Newton has won the Japanese brand’s Australian Technical Competition, taking the bi-annual event out from a field of 70 technicians and five finalists.

He will now go on to the global final of the Subaru World Technical Competition, to be held in Tokyo in November.

Mr Newton’s win of the national competition – and the Gary Matthews Trophy that comes with it – resonated strongly this year given the late Mr Matthews was his mentor and manager at Eblen Subaru in Glenelg, South Australia.

Mr Matthews died in 2011 after a battle with cancer, and Subaru Australia subsequently named its top award for technicians in his honour.

The trophy was presented to Mr Newton at a special event in Sydney by Mr Matthews’ widow Jo Brokenshire, who is also service manager at the Eblen Group, and the previous winner of the global competition Michael Cooper, who is a technician at Subaru Rosebery in Sydney.

The national final was held at the Subaru Academy Training Centre in Lidcombe, NSW, where the five regional winners were required to complete written and practical tests. The latter involved diagnosing electrical and mechanical issues pre-programmed into seven ‘stations’.

“There were a few tears at the presentation, given the Eblen connections between Tim, Gary and Jo,” said Subaru Australia managing director Nick Senior.

“It’s wonderful recognition of Gary’s legacy and his dedication to knowing every aspect of Subaru technology.

“We’re delighted Jo could be here to share in the celebration and we wish Tim every success on the global stage.” Ms Brokenshire said: “Gary would be so proud to see Tim here. He would be very humbled, because he was a no-fanfare person and to see his apprentice come through and win this tough competition is fantastic.”

The Australian final was run in conjunction with the Oceania Technical Competition, which was won by New Zealand’s Steve Comber, who also goes on to the global final in Japan.